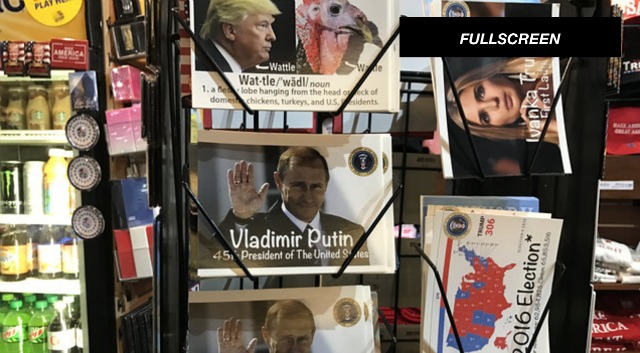 Two New York Artists stocked the shelves of Trump Tower’s gift shop with “new” merchandise. In a presidency where “alt facts” are truth and reality is crazier than satire, these new items could easily be seen as legitimate items that President Trump would hawk to the general public. “This weekend, Trump Tower’s gift shop featured a few strange items, including KKK hoods and postcards of Vladimir Putin.”

The artists slipped the items into the shop this past Monday- the false merchandise included “a Trump brand KKK hood “for fine people,” sealed packages of pee-proof rubber sheets, and a Russian flag. Postcards at the front of the store featured the 45th President of the United States, Vladimir Putin, as well as First Lady Ivanka Trump.” The oddest item of was a prosthetic the flap of flesh near the president’s throat area, known as a Wattle.

As reported by The Grio:

“We thought the tourists coming in to buy some stuff, especially people from other countries, should get the whole story of who the president is, because the items in the Trump store don’t accurately reflect the person,” one of the artists told Gothamist.

However, there is the possibility that the pure satire might be lost on a presidency riddled with absurdities.

“My partner was in the back putting in some of the items and he said to someone, ‘Oh did you see this?’ and they didn’t even bat an eye,” the artist said.

“Every time you think you’re going to get Trump on something, he outdoes the parody,” explained the artist. “He hasn’t started selling white hoods yet, but after that batsh** speech he gave two floors up — well if there’s enough money to be made, he’d probably start.”

The items were on display unnoticed by staff until Tuesday morning and when an attempt to buy the items drew a red flag to the unauthorized merchandise security was called and everything was removed within the hour.

What are your thoughts on the matter? What does it say about Trumps presidency if these outlandish items wouldn’t even draw attention to onlookers as being satire? Is the truth really stranger than fiction?

i maybe ruined this, but for a brief moment there were KKK hoods & piss proof sheets in the trump tower gift shop https://t.co/9Y15adfVve pic.twitter.com/oxifkCedMg