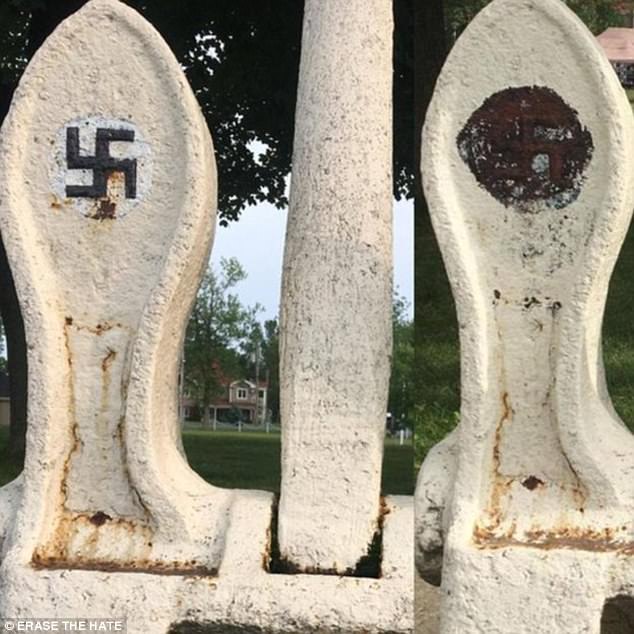 Corey Fleischer, the founder of Erase Hate, has made it his mission to remove hateful messages and graffiti in Montreal and its surrounding areas. This week, Fleischer was informed by a citizen of the small town Pointes-des-Cascades, Quebec, of anchors in a public park that were emblazoned with swastikas which needed to be painted over. When Fleischer attempted to paint over the anchors, the village’s mayor called the police explaining to Fleischer he couldn’t remove swastikas from a park, because “they are part of the local history” as a Nazi relic. Oddly enough, the anchors were found on a merchant boat in 1980, so not explicitly a piece of Nazi history.

As reported by the Daily Mail:

Police arrived and stopped Fleischer from covering them up (pictured) 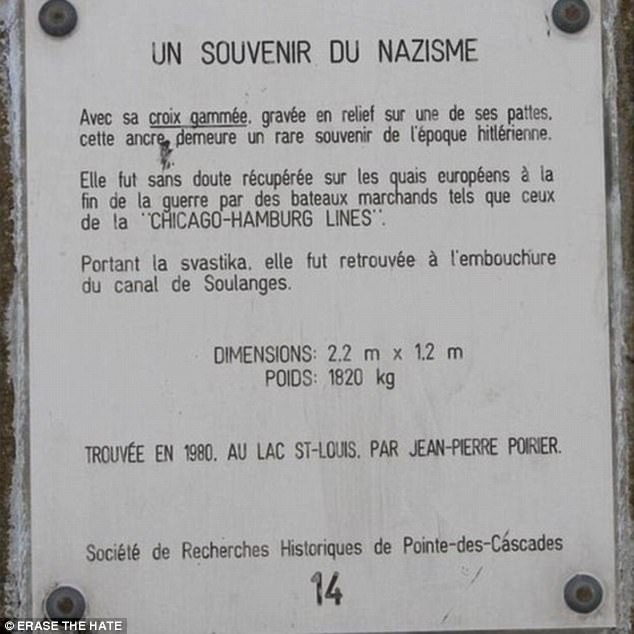 The open-air museum in the small town features dozens of historical anchors, including one with a swastikas engraved on it.

‘I decided to remove the paint around the swastika that the city had painted on this ancient World War Two anchor,’ Fleischer told CTV Montreal. ‘To have such a sign of hate in a public space is completely unacceptable.’

The local mayor, Gilles Santerre, spotted Fleischer and called the Quebec provincial police, saying the swastikas were part of local history and could not be removed.

Police then arrived and stopped Fleischer from covering them up.

There is a small plaque below the anchor but it does not give a lot of historical context.

It identifies it as a ‘souvenir of Nazism’ and says it was used in Europe at the end of War, probably on a merchant boat, and found in 1980, and therefore is not a Nazi relic.

‘The village of Pointe-des-Cascades does not endorse Nazism,’ said Mayor Gilles Santerre in a statement online.

‘Our village has a beautiful community and family spirit, and creates events that bring people together.’

The mayor also argued that before 1920 the swastika was a peaceful symbol.

Fleischer countered when he said: ‘There is zero place for any swastikas in any public parks, right across the world.

The village has about 1,500 people and is located about 50 miles from Montreal.

Watch the video of Fleischer’s confrontation with police. What do you think of Fleischer’s rationale behind the painting of the swastikas? Given that there are still cultures that use the swastikas as a peaceful symbol- is he right to say it’s depiction should be eradicated worldwide? Share your thoughts in the comments below.

On Thursday August 17, 2017 Erasing Hate was contacted by a concerned citizen that there was a black painted Swastika with a white circle behind it, in Park Saint-Pierre of the Municipalité de Pointe-des-Cascades just north of Vaudreuil, Quebec.Upon my arrival to the park what I found was much more than just a painted Swastika. In this extremely well groomed city park there is an actual World War 2 era anchor with a Swastika engraved right into the metal.Beyond that, the anchor seems to be very well cared for. In fact the city thought it was a bright idea to paint the anchor Tri-coloured (Beige, White and Black) to enhance and embellish the Swastika so that anyone passing by would be sure of what it was. This being in the middle of a family park where the municipality holds family events and children play. Being in this situation and with little time, I couldn't do much about the Swastika anchor. The City Festival was happening in less than two days with hundreds of kids and families showing up and I knew that something had to be done. What I decided to do was what I knew best.. Erase the symbol of Hate that was painted ever so eloquently by the city. I knew that if I did this it would minimize the visibility for any children, grandparents or families that would be passing by.As I began the process of erasing the paint that enhanced the symbol of Hate the cities mayor showed up to the scene. (He is the one in the motorcycle helmet at the end of the video.) He couldn't understand why I was so upset and why I was removing the paint that covered the Swastika. He then told me that if I didn't leave the park that he would call the police and charge me with "Destruction Of Property." His bullying tactics had little effect.The mayor had absolutely no issues with this sign of Hate in his park and told me that it was "A Part" of our history. Therefore there was no reason for anyone to be upset. My rebuttal to him was that we will "Never Forget" and that the only place for an anchor with a Swastika on it is in a museum.. where it belongs! What happens when children see it? What happens if a survivor walks through the park and sees it? What message is this giving to citizens, children and visitors to this area?! It has absolutely no place in a publicly shared area! WE ARE NOT living in the 1800's anymore when this symbol was a sign of peace!If this Swastika anchor was in Montreal’s Mount Royal Park or in New York City's Central Park as part of its "History" there would be absolute Outrage!!!This community has somehow gotten away with this for so long that this anchor is used as a way to attract visitors to the area. https://mapcarta.com/24542092 It is up to us as a society to have this Swastika anchor removed from this park! As well as every public place across the world! It is up to us to let everyone know that this type of prejudice will not stand anymore! That we will not be silent and that we will stand up for what we believe in! This is CANADA and we are a country that is built on EQUALITY!!!If you want to join the Erasing Hate army and make a difference than do it! PLEASE SHARE THIS VIDEO! Let everyone know what's going on in this public space! Let's come together as one and get this Swastika Anchor pulled out of this Park! The Before and After Pictures will be in the first Comment down below. #ErasingHateContact the city of Pointe-Des-Cascades and let them know what you think about their Swastika Anchor:Pointe-des-Cascades, City Hall105, chemin du FleuvePointe-des-Cascades, Québec, J0P 1M0info@pointe-des-cascades.comTél.: 450-455-3414Téléc.: 450-455-9671