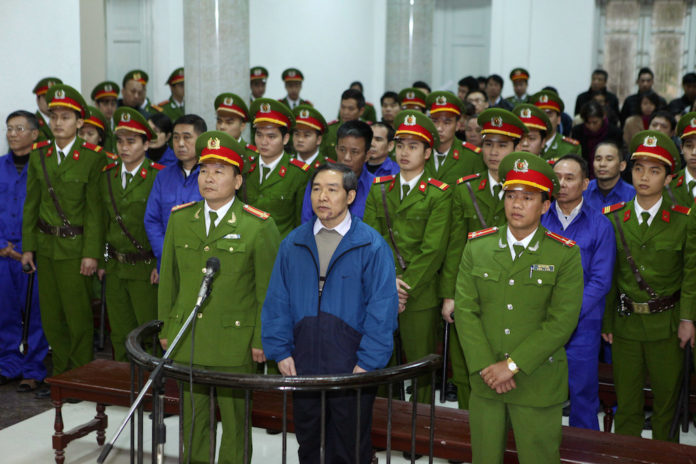 or the most part, American bankers whose rash pursuit of profit brought on the 2008 global financial collapse didn’t get indicted. They got bonuses.

Odds are that scandal would have played out differently in Vietnam, another nation struggling with misbehaving bankers.

Amid a sweeping cleanup of its financial sector, Vietnam has sentenced three bankers to death in the past six months.

In March, a 57-year-old former regional boss from Vietnam Development Bank, another government-run bank, was sentenced to death over a $93-million swindling job.

According to Vietnam’s Tuoi Tre news outlet, several of his colluders were sentenced to life imprisonment after they confessed to securing bogus loans with a diamond ring and a BMW coupe. And last week, in an unrelated case, charges against senior employees from the same bank allege $47 million in losses from dubious loans.

None of this would impress Bernie Madoff, mastermind of America’s largest ever financial fraud scheme. The combined amount from all three Vietnamese cases adds up to less than 1 percent of his purported $18-billion haul.

But these death sentences nevertheless are high profile scandals in Vietnam.

That’s the point. Human rights watchdogs contend that splashy trials in Vietnam are acts of political theater with predetermined conclusions. The audience: a Vietnamese public weary of state corruption. But these sentences also sound loud alarm bells to dodgy bankers who are currently running scams.

“It’s a message to those in this game to be less greedy and that business as usual is getting out of hand,” said Adam McCarty, chief economist with the Hanoi-based consulting firm Mekong Economics.

“The message to people in the system is this: Your chances of getting caught are increasing,” McCarty said. “Don’t just rely on big people above you. Because some of these [perpetrators] would’ve had big people above them. And it didn’t help them.”

Like most nations that crush dissent and operate with little transparency, Vietnam is highly corrupt.

According to a World Bank study, half of all businesses operating within the communist state expect that gift giving toward officials is required “to get things done.” Transparency International, which publishes the world’s leading corruption gauge, contends Vietnam is more corrupt than Mexico but not quite as bad as Russia.

Unlike in America, where judges can’t sentence white-collar criminals to death, Vietnam can execute its citizens for a range of corporate crimes.

Amnesty International reports that death sentences in Vietnam have been handed down to criminals for running shady investment schemes, counterfeiting cash and even defaulting on loans. This is unusual: United Nations officials have condemned death for “economic crimes” yet Vietnam persists with these sentences — as does neighboring China.

Though statistics on Vietnam’s opaque justice system are scarce, a state official conceded that more than 675 people sit on death row for a range of crimes, according to the Associated Press.

It’s still unclear how the bankers will be killed. Vietnam’s traditional means of execution involves binding perpetrators to a wooden post, stuffing their mouths with lemons and calling in a firing squad. The nation wants to transition to lethal injections. But European nations refuse to export chemicals used in executions (namely sodium thiopental) to governments practicing capital punishment.

Fraudulent bankers are receiving heavy sentences at a moment when Vietnam is enacting major financial reforms.

For decades, Vietnam has been slowly transforming its communist-style, state-run market into a more open and competitive arena. In the post-reunification era, the government owned every bank in Vietnam. Today, state-run banks control only 40 percent of all assets.

This push to bank in a more Western style has ushered in improvements as well as temptations to swindle. According to the UN economist Vu Quang Viet, Vietnamese credit laws passed in 2010 “simply copied the lax US law now widely believed to be at least partially responsible for the financial debacle in 2008.”

Campaigns to root out corruption are promoted as a way to entice foreign investment, which could help prop up Vietnamese banks whose growth has slowed from a sprint to a jog.

But the recent death sentences aren’t really intended to prove the reformers’ sincerity to the outside world, according to McCarty.

“They don’t care about foreigners. It’s all internal politics,” McCarty said. Foreign banking honchos wouldn’t be impressed by a few executions anyway. “If you really want to want to resolve the problem, you can’t just arrest people,” he said. “You’ve got to improve accountability and transparency in the entire system.”

A leading Vietnamese newspaper, Thanh Nien, is also pushing for system-wide cleanup in lieu of showcase trials against a few corporate criminals.

An op-ed in the paper recently compared death sentences for corruption to fighting fire with fire. The preferred approach would be dousing corruption before it burns through public funds. “It is better to prevent corruption,” the paper opined, “than deal with it after the fact.”