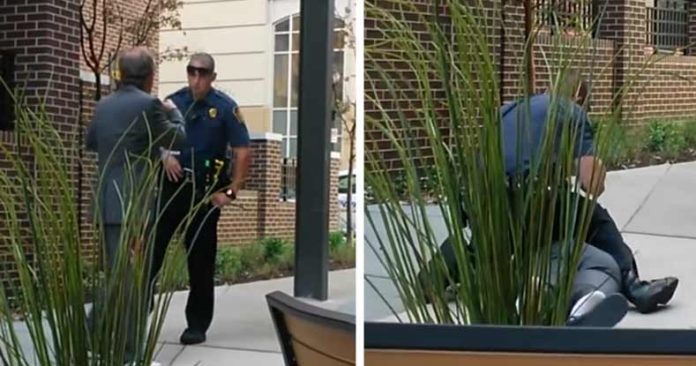 Allentown, PA — Jim Osche likes to go out into public and sing as a means of relieving stress. However, Osche’s stress relief was met with police brutality and is now the subject of an excessive force lawsuit brought against an Allentown police officer who attacked him for singing.

“He said, ‘We’ve gotten some complaints about your singing, it’s kind of loud,’” Ochse testified. “He said, ‘Why don’t we make a pact? You can sing any time after five o’clock.’”

However, that street singing would come to an abrupt and brutal end when officer Robert Busch responding to Osche’s performance. The entire interaction was captured on video and speaks for itself.

“For some reason, they view my client as a ’60s hippie and they can’t stand his singing, so they beat him up to the extent that he still can’t walk right to this day,” Richard Orloski, Ochse’s attorney said.

Ochse is the first person to admit that not everyone loves his singing. However, the force that he was met with on that August afternoon was no just response to bad singing.

That night, as Osche walked down the sidewalk in front of Shula’s Steakhouse in downtown Allentown, the restaurant guests seemed to be pleasantly receptive as Osche serenaded his friend who bartended there. Many of them pulled out their phones to record this cheerful man giving his rendition of Beach Boys, Barbara Ann.

After wrapping up his song, however, Osche was met with police violence instead of applause.

Osche seemed to be agitated by the police presence and looked to have heated words with the officer. However, at no time did Osche touch or otherwise warrant the violent action that followed.

After he turned to walk away, Busch grabbed Osche, claiming he resisted, and violently threw this 61-year-old man to the ground, causing him to scream in agony.

“My body tensed up. If anybody has been in a lot of pain … you clench up,” Ochse said, denying Busch’s claims that he resisted efforts to handcuff him.

“Mr. Ochse was creating a public disturbance, screaming, yelling, people were moving away from this guy, people were scared,” claimed David MacMain, an attorney for officer Busch, during the trial this week. However, it was clear from the video that no one was running away.

As the Morning Call reports, Busch claimed that his force was reasonable and he could’ve used much more.

Busch testified that his use of force was within the continuum of force officers are trained to employ that ranges from simple presence and verbal commands to less than lethal weapons, such as pepper spray and stun guns, to deadly force. Under the circumstances, Busch would have been justified in using hand stuns, or pepper spray, he said.

Busch testified that he thought Osche was a threat and could’ve hurt him or others. Apparently, according to this officer, bad singing is now dangerous.

According to Luisa Ranis Soos, who posted the video to Facebook in 2015, the guards claimed that Osche touched the officer. However, according to the video, this was entirely false.

Though Osche was arrested and held in a jail cell for over an hour, police did not inform him of any charges, only saying, according to Osche, that he would be “cited by mail.”

The trial will continue this week and while Busch hasn’t faced any discipline for taking down Osche for singing, rest assured that the taxpayers most likely will.

Below is another video, taken by the bartender who Osche was serenading that night. Notice that no one is complaining in either video and they are, in fact, entertained.