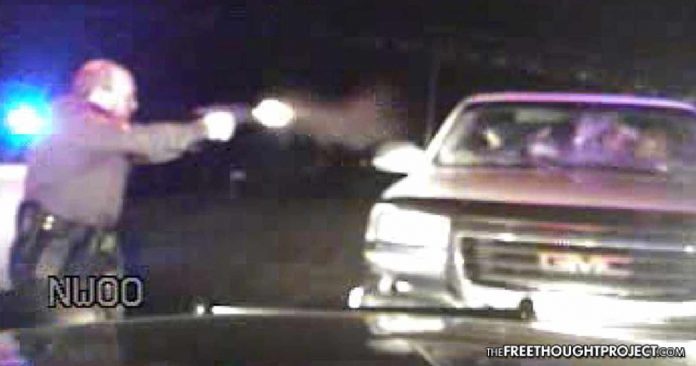 From: The Free Thought Project By: Matt Agorist

Morgan County, UT — The victim of a police shooting is devastated after the U.S. 10th Circuit Court of Appeals has ruled that the officer who shot her in the face for attempting to flee the scene of a traffic stop was justified.

The case has been ongoing for several years and the battle to hold the officer accountable has been uphill at best.

On Nov. 24, 2012, Kristin Biggs Johnson made the poor decision of getting intoxicated and driving her vehicle. The choice to drink and drive, lead police on a chase, and attempt to flee nearly cost her her life.

Johnson was blinded in her left eye when Sgt. Daniel Scott Peay fired into the cab of her pickup truck at the end of a 32-mile high-speed chase that ended in a cul de sac. Despite not have a reason, Peay made the decision to employ deadly force and shot Johnson in her face. Luckily, she was only blinded.

The dashcam video of the incident showed there was no reason to fire at all.

Daniel Peay and his brother Christian Peay, both deputies with the Morgan Sheriff’s Office at the time, were involved in the chase. Once they had her boxed in, Johnson attempted to flee once more. However, that is when the officer’s fear took over.

Daniel Paey said he just knew this drunken woman was going to kill them as he saw a “look of rage” on her face as she slowly rolled her truck back and forth in a futile attempt to drive away. When he lost sight of his brother Christian, that’s when Daniel Peay decided to open fire.

“Christian dropped out of my view,” Daniel Peay said in his deposition. “I didn’t know if he was under her vehicle, if she had hit him, or if she was pinning him between the vehicles. And I fired to stop her from injuring my brother.”

Just before the shooting, the court said, “the videos clearly demonstrate Johnson’s willingness and ability to use her truck to hit, and thereby move, law enforcement vehicles in close proximity to several police officers.”

However, hitting a vehicle to escape police and killing a person are two entirely different scenarios. From the video, we can conclude that at no time were either of the deputies lives in danger. In fact, the truck was entirely stopped when Peay fired.

“Sergeant Peay employed deadly force that, in retrospect, may have been unnecessary,” the appeals court said this month. “But (Peay) reacted to a high-intensity situation after Johnson had led law enforcement on a lengthy car chase, repeatedly failed to heed officers’ warnings and commands, and maneuvered her truck in a way that a reasonable police officer could have concluded she was using it as a weapon and was intent on resuming her flight, even if it meant putting officers’ lives in danger.”

The Davis County Attorney’s Office conducted an independent investigation and determined Peay’s “use of potentially lethal force … was not necessitated by the facts” and the shooting did “not squarely fit with the letter, scope and intent of” state and related federal law. However, Davis declined to prosecute Peay because “a unanimous jury would not convict Sergeant Peay of a crime when presented with all of the evidence.”

Conveniently for Peay, the department also ‘lost’ the internal administrative review report on the shooting. Campbell then ruled against a motion for sanctions on County officials for such dereliction. After the investigation was deleted in a computer crash, no hard copies were found — and Peay was returned to duty.

“There is no evidence to suggest that the defendants’ explanation for loss of the electronic copy is disingenuous,” Campbell wrote.

As the Standard reports, in a 2013 plea bargain in Johnson’s criminal case, prosecutors dropped an aggravated assault charge and she pleaded guilty to misdemeanor DUI and felony failure to stop at the command of a police officer. She received a suspended 0-to-5-year prison sentence and was released on 36 months of probation with credit for jail time served.