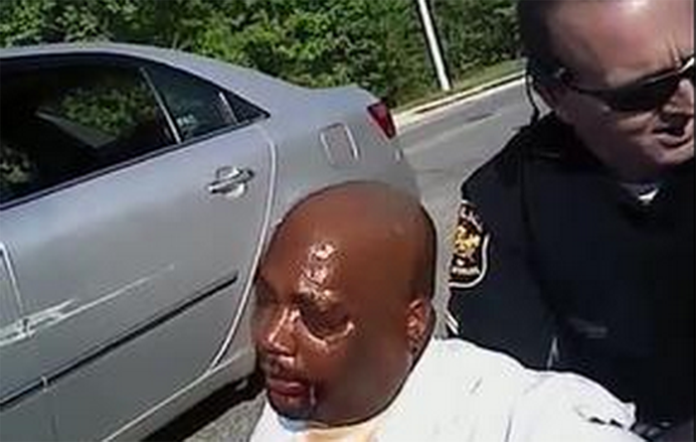 FREDERICKSBURG, VA – A police officer has been allowed to “resign” after a video surfaced showing him tasing and pepper spraying an innocent victim in a car.

In this case, the victim was completely unresponsive — clearly not making any threatening gestures toward the officer.

According to reports, the driver of the vehicle, David Washington, had earlier collided into a city road side, another vehicle, and then stopped in the middle of the road.

They pointed guns at him and ordered him to get out of his car, but he was motionless.

You’d think by this point officers would be able to use their discernment to judge that David’s unresponsiveness called for medical attention, not violence.

The officer then pepper sprays David’s face for about 6-8 seconds straight, saturating him in the burning chemicals.

The bodycam footage then shows a cop dragging David by the arm out of his car like a rag doll and throwing him to the pavement.

After torturing this man and threatening to “smoke” him as they drew guns on him, it finally donned on officers that David was experiencing a medical emergency. He was eventually transported to Mary Washington Hospital.

Investigators found that the use of taser and pepperspray were unwarranted.

Of course it was unwarranted.

Scenes like this just go to show that many officers are using tasers and pepper spray as obedience tools — eager to prod us like cattle and inflict pain on us at the mere hint of disobedience to their self-perceived authority.