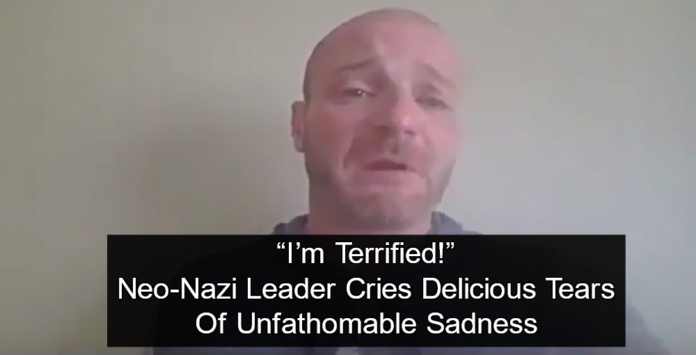 Neo-Nazi blues: Tough talking white supremacist Christopher Cantwell cries like a baby because there is now a warrant out for his arrest.

Christopher Cantwell, a spokesman for Unite the Right, and co-organizer of the violent white supremacist rally that left one woman dead and many more injured in Virginia last weekend, says he’s “terrified” because there is now a warrant out for his arrest in Charlottesville.

The once tough-talking neo-Nazi leader released a tearful video of himself lamenting the fact that a warrant has been issued for his arrest.

I called the Charlottesville Police Department, and said, ‘I have been told there’s a warrant out for my arrest.’ They said they wouldn’t confirm it but that I could find this out I could go to a magistrate or whatever.

With everything that’s happening, I don’t think it’s very wise for me to go anywhere. There’s a state of emergency, the National Guard is here!

Stopping to wipe away his tears, the Neo Nazi leader cried:

I don’t know what to do. I need guidance.

Our enemies will not stop, they’ve been threatening us all over the place…

Previously, Cantwell was featured in a short documentary by Vice.com on the racist white nationalist movement inspired and emboldened by President Donald Trump. When asked if his organization was non-violent, the once tough-talking racist thug declared:

We’re not non-violent. We’ll f***ing kill these people if we have to.

However, now Cantwell is singing a different tune. The once tough-talking racist who bragged about going to the gym to make himself “more ready for violence” is now crying like a little baby.

Bottom line: Neo-Nazi leader Christopher Cantwell is a domestic terrorist, and his tears of unfathomable sadness are delicious.

U.S Attack Kills At Least 40, Wounds 85 From Militia Fighting AGAINST ISIS In...