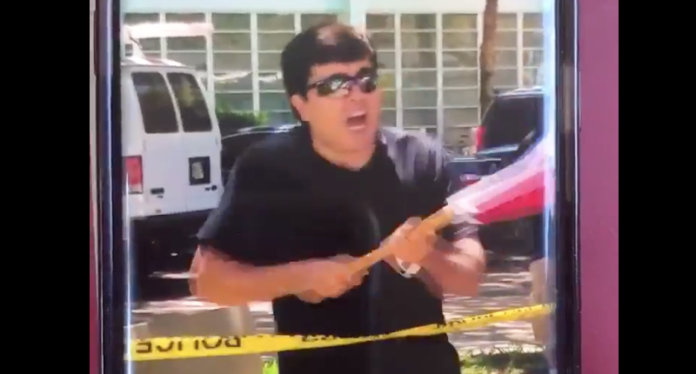 As we previously reported, in Hollywood City, there are a series of streets named after Confederate generals and KKK members ironically at the heart of the city’s African-American neighborhood. City commissioners have agreed to move forward in changing the names of the streets, one of which is named after a Confederate general and Ku Klux Klan member Nathan Bedford Forrest in a bid to move forward and do the right thing by their residents who are primarily Black. As city commissioners met in regards to the renaming the streets on Thursday, one lone white supremacist came to rebuff the attempt but was met with 150-200 supporters of the change. Chris Cedeno the sole person to protest the change- was quickly arrested as he charged the large crowd of anti-racism activists with a Confederate Flag.

“Today, a local white supremacist, Chris Cedeno, was arrested after witnesses on-scene say he charged into the crowd of civil-rights protesters,” the Miami New Times reports. “Cedeno was standing near the entrance to Hollywood City Hall, in front of a police line that separated him from 150 to 200 protesters. After Cedeno briefly jawed back and forth with a protester from roughly 10 feet away, he ran directly at the crowd. Cops swooped in and removed Cedeno in handcuffs.”

“Cedeno showed up to the protest in a shirt emblazoned with the logo for the Florida League of the South, a white nationalist group that wants the Confederate states to secede from the union again and create a society led by white, Christian people of European descent,” New Times noted. “Cedeno waved a flag that combined the classic Confederate “stars and bars” with the black-and-white League of the South logo.”

Earlier this year, Cedeno wore a neo-Nazi pin on his shirt collar when defending the use of the n-word by a prominent Miami Republican.

The sole counter protester against renaming confederate street signs gets cuff & detained after this… @WPLGLocal10 pic.twitter.com/zqmK4EUyNC

What are your thoughts on the changing of the street names in Hollywood City? Do you think the change is warranted, or do you think the street names should remain the same? What does it say about the community if only one white supremacist shows up to counter the commissioner’s decision to move forward? Let up know your thoughts on the matter in the comment section below.