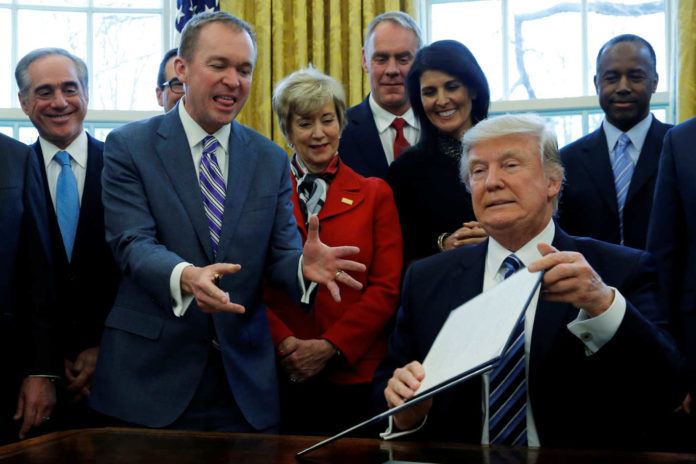 Throughout his campaign, President Donald Trump vowed not to cut Social Security or Medicare, but that might be a broken promise.

The president’s proposed budget featured a $70 billion cut in Social Security disability benefits over the span of a decade, reported Politico.

Earlier this year, Mulvaney tried to get Trump to agree to cuts in Social Security and Medicare, but the president wouldn’t budge. Then he brought up disabilities benefits, which piqued Trump’s interest.

“Look, this is my idea on how to reform Social Security,” the former South Carolina congressman began.

“No!” the president replied. “I told people we wouldn’t do that. What’s next?”

“OK, disability insurance.” Mulvaney was talking about the Social Security Disability Insurance program, but Trump either did not make the connection, or supported the trickery.

“Tell me about that,” Trump replied.

Politico notes that Mulvaney is proudly telling this story about how he manipulated Trump into cutting benefits for 11 million disabled Americans on the record — and it’s an indication of the clout he has that he doesn’t fear telling anecdotes that show his boss to be woefully misinformed.

“In a White House where the president and most of his inner circle are new to government, Mulvaney is one of Trump’s few top domestic policy aides with any prior experience in how Washington works, and the disability story is just one example of how he uses that advantage to target Big Government generosity,” Politico writes. “At OMB, he gets to weigh in on almost everything the government does, and he’s driving the administration’s ambitious efforts to slash spending, kill regulations and reorganize the federal bureaucracy.”

Top 9 Signs from the Anti-Racism Counter Protest in Boston