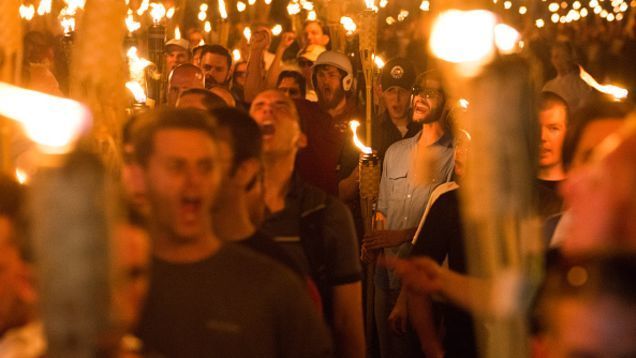 The racists are still marching with guns and hair-trigger tempers but the police have taken a unique “hands off” approach to the melee and letting these white men enjoy the very privilege they whine is being taken from them.

CNN reports that at least two people have been injured in “violent clashes”and yet, video only shows about three cops in riot gear, using measly mace to keep the peace. We all know what happenes when Black people congregate. All hell breaks loose. Had this been a Black Lives Matter march, Charlottesville would have been shut down and the jails filled. As per usual, the rules for everyone else don’t apply to white men.

Police are clashing with and spraying mace at counter protesters at the Unite the Right rally in #Charlottesville https://t.co/hz1ff4hDWhpic.twitter.com/aY74rXz8CI

The hypocrisy is astounding.

Earlier: On Friday night, throngs of “Unite the Right” white nationalists marched onto the campus of the University of Virginia with torches or torch-like devices after a federal judge ruled that their silly march of racism on Saturday could go as planned.

By many accounts, the Friday assembly was as much an effort to continue to intimidate and terrorize with the symbolism of the KKK, as to actually perpetuate the violence that the group is known for.

In what many have confirmed was a violent night, these avowed white supremacists marched with words like “White Power” and “White Lives Matter” while actual fist fights broke out.

It's 2017 and white supremacists are marching around #Charlottesville with torches, beating people up, and intimidating churchgoers. pic.twitter.com/EcHVERx3IF

These violent white supremacist terrorists are in #Charlottesville assaulting people right now.THIS IS NOT ABOUT FREE SPEECH #UniteTheRight pic.twitter.com/89sQxb0VKs

But as photos and videos from the evening show, there were no police in riot gear to contain these violent whites, and although the police determined it was an “unlawful assembly,” there are no records of arrests.

The disparity is clear but a few things really struck me in terms of the police response to these precious white supremacists versus that of Black Lives Matter protests. I have a few thoughts.

1. What are these fucktards really protesting?


As far as I can determine, the Saturday protest is about a statue of a dead Confederate general and its removal. Most Movement for Black Lives Protests are in response to a dead black person—man, woman, child—killed callously and by all many video accounts, wrongly by police. Black people and their allies take to the streets to express their righteous anger, their visceral fear, their constitutional right to peaceably assemble against injustice, and are met with tear gas, tanks and rubber bullets. These cretins in Charlottesville are coming together to mourn the lost days of other human beings held in human bondage and a general who fought for just that.

2. There was actual violence at the Charlottesville “protest” but no commensurate police response.

Black Lives Matter protesters are routinely roughed up, arrested, intimidated and hurt in protests. Most of these protests are peaceful. Or the violence that occurs is actually provoked by law enforcement. The racists are actually out here fighting with people and are treated with kid gloves.


I know there's a difference here, but I just can't quite put my finger on it. #Charlottesville pic.twitter.com/5VfuskcwfI

There has been a long history in this country of the fear of black bodies in congregation. In the state of Virginia (same place, yes, capital of the Confederacy), slaves could not meet in more than groups of five. Hell, Black teenagers are routinely roughed up, arrested, harassed or killed for just being. And these are not even adults. The response to groups of whites versus groups of blacks is a study in opposites; when black people exercise their right to peaceably assemble and protest injustice, there is an overwhelming militarized response.

For whites not so much. Right now there are scores of white men marching with their semi-automatic weapons on display … and no one will shoot them you can guarantee.

Unidentified militia has arrived at #EmancipationPark ahead of the #Charlottesville rally with guns in tow. pic.twitter.com/zCLCBU78PF

Confirmed: Police Told to Stand Down in Charlottesville—Did Nothing as War Broke Out