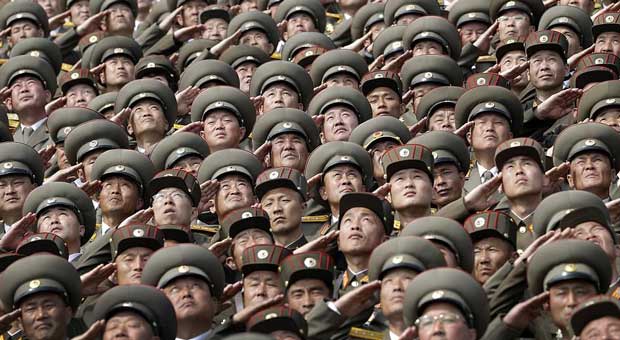 North Korea has announced that 3.5 million North Korean citizens and party member have volunteered to join the army as tensions with the US escalates.

A North Korean official newspaper, Rodong Simmun, reported a massive intake of new military members came after the North Korea Central News Agency (KCNA) issued a statement announcing the UN sanctions that were brought in on Monday.The sanctions were backed by all 15 voting nations which cut North Korea’s exports by a third.IBtimes reports:

The past seven days have seen a sharp increase in the rhetoric between Donald Trump and Pyongyang after fresh sanctions were imposed following a series of high-profile missile tests.

Donald Trump has threatened North Korea with “fire and fury” as well as tweeting that the US was “locked and loaded”.

It follows the announcement that North Korea had miniaturised a nuclear warhead capable of reaching the mainland US.

Pyongyang then said that it was considering attacking the US Pacific island territory of Guam.A rally was held on the streets of Pyongyang, North Korea’s capital, on Wednesday (9 August) to show support to the Kim regime.

These rallies are commonplace during periods of increased tensions as a show of force to the rest of the world.

North Korea already has one of the largest militaries in the world with just over 1.1 million people in the active army as well as millions more in the reserves and paramilitary.